BioHaven® floating treatment wetlands leverage natural systems and science to restore and improve water quality. Microbes play a critical role in breaking down pollutants. The microbes float naturally in the water but need surface area to grow – the more surface area, the more removal. Under the water, the planted vegetation’s roots that grow down into the water coupled with the island’s matrix provide necessary substrates for microbes to colonize. These microbes, and the sticky secretions they produce (biofilm), will collect nearby algae and zooplankton forming a community of periphyton (an underwater organism or community of microbes, algae, cyanobacteria, zooplankton and invertebrates attached to a substrate). Periphyton is the primary agent responsible for cleaning water and sequestering excess nutrients from urban and agricultural run-off. The microbes will help break down the majority of the nutrients in contact while algae (clinging to the island) and planted vegetation uptake some of the nutrients for growth. Periphyton is also the base of most aquatic food webs, meaning the islands provide valuable habitat for fish, reptiles and invertebrates as well as providing necessary sustenance for the aquatic community.

A floating treatment wetland’s main role is to provide an attachment site for microbes (bacteria that break down the nutrients). All waterways already contain microbes but lack of attachment sites means they are floating in the water column as individuals. Once an FTW is launched, many microbes will latch on to the island’s matrix and a colony will form. Each microbe will secrete a sticky substance as a means to link with others creating biofilm. The sticky nature of biofilm clings to other organisms in the water as well, including green algae, cyanobacteria, and zooplankton, etc. This amalgamation or community of organisms is known as periphyton. Periphyton as a community is exponentially larger in surface area than a single microbe and this increase in surface area results in more contact between microbes and nutrient rich water leading to greater nutrient removal and mass transfer. Floating wetlands’ nutrient removal processes are key factors in cleaning the water and the increased surface area periphyton is able to produce the islands are able to out compete floating algae for nutrients preventing harmful “algae blooms.”

FTWs also provide a carbon sequestration system to the waterway. The periphyton and roots from the island’s surface vegetation will use dissolved carbon dioxide for photosynthesis and other dissolved organic carbons (DOC) will be trapped and consumed by the periphyton. 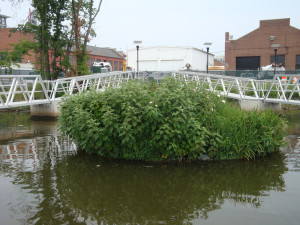 The island also allows for consumption of Total Nitrogen (TN) to be safely converted back into Nitrogen gas and released into the air, helping to prevent or slow down the process of eutrophication. Total Nitrogen, in the forms of ammonia and nitrate, is removed by the bacterial processes of nitrification (ammonia) or denitrification (nitrate). Nitrification, an aerobic bacterial process uses oxygen to convert ammonia into nitrate which is then converted into Nitrogen gas and released into the atmosphere through denitrification, an anaerobic process. The bacterial processes may seem mutually exclusive, research has proven that Biohaven® floating islands foster both procedures with proper aeration. Phosphorous is the other main nutrient causing eutrophication that floating wetlands help reduce. Total Phosphorous (TP) is removed/sequestered through a number of biological and mechanical pathways. Particulate phosphate will be filtered in the island matrix and peripyton and either remain inventoried in the man-made wetland or settle to the bottom. Phosphorous will also be absorbed by autotrophic plants for growth and in the case of algae and periphyton, it will be consumed by aquatic organisms and will be dispersed through the food chain. Phosphorous can also be removed manually by replacing various “island accessories” occasionally.

Floating wetlands have been shown to remove all of the traditional nutrients and pollutants of concern in wastewater and run-off, nitrate, ammonium, phosphorus, suspended solids and organic carbon. In order to maximize the FTWs’ effectiveness, forced water circulation through the island’s matrix has shown increase in production of up to 500%.