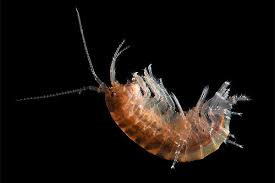 When people talk about freshwater ecosystems, the first images that come to mind are animals like fish, frogs, turtles, and birds. These organisms, called vertebrates, are the largest and most familiar life forms found in freshwater environments. However, a much more abundant and equally important part of the health of these ecosystems is a group of animals called invertebrates. These creatures are vital to both the long- and short-term wellbeing of aquatic ecosystems because of their sensitivity to environmental factors and their basic position in the food web – any disturbances in their populations result in a domino effect that negatively impacts animals higher on the food chain. Thus, a healthy invertebrate population equals a healthy ecosystem. BioHaven® Floating Islands are an efficient, natural method of keeping invertebrate organisms, and therefore, the entire state of the body of water in which they are implemented, healthy.

Invertebrates, in contrast to vertebrates, are simply animals that lack an internal skeleton.  Many aquatic invertebrates live on, under, and around sediment on the bottoms of bodies of water such as lakes, rivers, streams, and ponds. Invertebrates are often regarded as “benthos”, which refers collectively to organisms that live on the bottom. These benthic invertebrates include the larval stages many different species of beetles, mayflies, caddisflies, stoneflies, dragonflies, aquatic worms, snails, leeches and numerous other organisms that inhabit the bottom.

The importance of invertebrates

Invertebrates are essential to the health of aquatic ecosystems. Their sensitivity to changes in environmental quality makes them excellent biomonitors, and data gathered from benthos populations can be used individually or in combination with other environmental characteristics to measure the level of environmental harm caused by contaminants. Since different species exhibit different responses to changes in these factors such as water chemistry, pH level, and pollutant concentration, the wellbeing of benthic invertebrate communities can “paint a picture” of the quality of the aquatic ecosystem as a whole.

As a result of the fact that invertebrates make up one of the first few steps of the aquatic food web, the health of benthic organisms not only reflects the health of the ecosystem but also directly influences it. Unhealthy invertebrate populations can constitute disturbances, such as when they transmit diseases. For example, certain benthic invertebrate species serve as parasite-transmitters; if these invertebrates increase their populations in stream sediments, they may spread a lethal disease to fish, causing their populations to decline as well. Drops in the levels of benthic species responsible for decomposing dead organisms can result in accumulation of organic nutrients to dangerous concentrations, which can cause formation of toxic algal blooms, loss of oxygen in deeper waters, and high amounts of harmful pollutants such as ammonia and hydrogen sulfide. In short, keeping aquatic ecosystems healthy means making sure that its invertebrates are healthy.

Floating islands are efficient, natural regulators of environmental factors that determine the health of benthic invertebrates. By using biofilms living within their matrix material in combination with the phytoremediation abilities of plants, Biohaven Floating Islands are able to reduce excess nutrients, stable water pH levels, and eliminate contaminants, all of which positively impact benthos populations.

Our rivers flowing through industrial areas typically no longer have the overhanging banks so valuable for a healthy eco-system. Marek Landscaping installed floating islands for habitat restoration in the Milwaukee River. Dylan Olson, fisheries biologist, cut out a core sample after one year to understand the population living in the islands. He found a healthy population of important benthic invertebrates, including insect larvae, snails, and crustaceans from the families Amphipoda which are responsible for recycling nutrients. The specimens found were Gammarus, Chydorus Sphaericus, Chironomid Larve, and Polychaete Worms (Try saying all that 5 times fast). Invertebrates from the Copepoda  family were also found,  the main invertebrates were Cyclopoida and Harpacticoida, which are very good bio-indicators. By ensuring the health of these vital organisms living at the bottom of freshwater lakes, streams, rivers, and ponds, floating islands promote the health of the ecosystem as a whole.